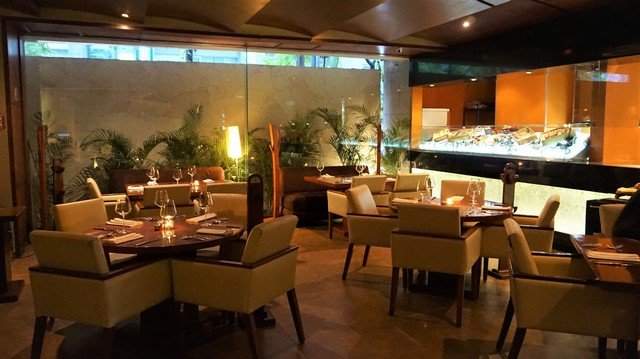 In summary, my salad, although good, was excessive. And the expensive steak and lobster were both poorly executed.

In summary, my salad, although good, was excessive. And the expensive steak and lobster were both poorly executed.

The décor is impressive. Dark. Very dark. It is just leathery enough to be a steakhouse. But just elegant enough to be upscale dining. An impressive army of hostesses, managers and waiters, were scurrying about to uphold Harry’s name as the finest steakhouse in all of Mexico City.But there are challengers to throne. Two highly successful steakhouse chains from the United States, a couple from Brazil, and at least one formable local opponent stand poised to unseat Harry’s as the king of the steakhouses in Mexico City.I took a hammer to my ceramic piggy-bank to rustle up enough pesos to pay for a dinner at Harry’s, which is a very expensive restaurant, arguably the most expensive in DF, although The Palm is running neck and neck with Harry’s in that category.I easily and efficiently made a reservation on OpenTable.com. I was greeted at the door by the hostess and immediately seated. I was given my choice of tables, and, in fact, after being seated, requested a few minutes later to be moved to a table with slightly better lighting to give me some shot at adequate photos.The restaurant, in keeping with current restaurant trends, has a large open kitchen at the back of the dining area, and an assortment of high-quality beef and seafood are strewn on ice at the front of the kitchen, proudly exhibited to all the diners.I was constantly attended to by both a manager, a waiter, and what I would describe as a waiter’s assistant. The manager spoke fluent English. They quickly accommodated my request for a table change. They were friendly, attentive, and accommodating throughout the entire meal. There were, however, a few brief occasions during the service where my needs went unnoticed by the wait staff. The images adequately demonstrate the ambience and sophistication of the décor.But what about the food?After being seated, an array of fresh breads and sauces were delivered to the table, including a pan of dinner rolls just pulled from the oven.At the time of ordering, a tray of the available cuts of beef were displayed, giving the diner a look at the exact quality, marbling and thickness of each cut.I bit the bullet and ordered a Surf n Turf, the ribeye and lobster combination, preceded by the iceberg lettuce wedge salad (a classic accompaniment in high-end U.S. steakhouses).Within a few minutes the salad arrived. It was ridiculously enormous. Easily big enough for three diners as an appetizer item.It wasn’t a “wedge” of the head of the lettuce like you would typically see in the United States. It appeared to be the entire head of the lettuce sitting erect. More of a lettuce monument, than a salad. Quite honestly, it looked a bit odd. Although I suppose there are those that would be impressed with this type of grotesque display, I would have been more than content with just a few wedges or thick slices off the head of the lettuce.It was drenched in a creamy blue-cheese dressing, with a few big chunks of blue cheese at the foot of the monument (as if paying homage) and a few salad tomatoes, cut in half, mixed in with the chunks of blue cheese.The salad was good. But it was way more than I could eat. I would have been more impressed with a much smaller rendition sprinkled with some crumbled blue cheese.Oddly, or at least it seemed odd to me, the steak and lobster tail were not served on the same plate, nor at the same time. And the plates were huge on which both the tail and the steak were served. Highly unusual not serve the steak and the tail at the same time on a single plate.Perhaps explained by some local custom I’m not familiar with. But clearly not the typical protocol for a Surf n Turf.I had ordered the steak, medium-rare, pink in the center. And I do not think there was any confusion as to my preference. The steak, as you can see in the photo, although adequately seared, was overcooked. That steak is somewhere between medium and medium-well. Accordingly, it is difficult for me to assess the quality and taste of the steak. But my impression was that the quality and texture was nowhere close to the dry-aged steak I received with my Surf n Turf at Capital Grille, nor as rich and flavorful as the cut imported from Argentina at La Cabrera.As you can see, the exterior of the lobster tail was heavily seared. Unfortunately, this technique rendered the tail slightly overcooked as well. Not significantly enough to make it unenjoyable. It was still moist. But, nevertheless, slightly overcooked by international dining standards. Something you wouldn’t likely mention at 95% of the restaurants in the city. But Harry’s is the king, attempting to retain his crown.In summary, my salad, although good, was excessive. And the expensive steak and lobster were both poorly executed.And what did this meal that didn’t quite hit the target cost me? A whopping $1,470 pesos (about US $80), which for Mexico City, makes it one of the two most expensive meals I’ve paid for. Significantly more than either of the tasting menus at Sud 777 or nearby Raíz.Harry’s offered near perfect service in an upscale and sophisticated ambience, but missed the mark on execution of the meal. Not the way the king of the hill should be defending his domain!